Jens Rausch’s paintings deal with subjects whose origins lie in the natural environment. This means that it is fields, mountains or forests that the painter with Hessian roots resorts to when playing out his artistic processes. The subject in question is already in itself home to the processual, a life of its own and sometimes even the fleeting moment. It not only appeals to Rausch to pick up on these artistically, but above all to transform them further.

In analysis and playful experimentation, he literally gets to the bottom of natural processes. He searches for materialities that correspond to the respective subjects and accepts their material properties, which are sometimes not easy to accomplish, in such a way that they come to fruition as raw material for his work. Thus, for example, materials that were once forests themselves give rise to so-called alchemical mixed forests: pictorial works of ash, bitumen, soot, carbon, which chemically and physically form a forest, but which dissolve into abstract forms and structures on closer inspection. Or the artist creates his mountains from marble powder, plaster, graphite, lime, lead and other mountain materials and aptly calls this series of works BERGEn (mountains). Time and time again, there are also physically formed – even literally sculptural – works; salvaged from the material properties themselves. To some extent, the work creates itself almost out of itself by means of Rausch unfolding, for example, formally unstable rolled lead or paper in such a way that buckling weak points in counter-movements regain a balance of forces with the strong points. In this way, those physical forces and structures which can be found equally universally in nature become visible. It therefore seems only logical that he should give his works picture titles in which the geological terminology, the process description and the result are of equal importance: folded mountains, breaking edges, breaks, folds, distortions, tear-off edges ... the idiosyncratic nature of the materialities often collides with the actual artistic intention because sometimes it is only to a limited extent that these processes can be controlled. Rausch reacts to this; sharpening individual processes with white or black oil paint, layering on and occasionally eroding off again. In his Feldarbeiten (‘field works’) he even uses fire to occasionally break the surface of the canvas up into the third dimension in order to create a thinking space or a kind of 'crypt’.

It is his artistic reflection and response both to, and through, the natural process and literal understanding of the material and matter that makes grasping and dealing with the world so essential to Rausch's artistic understanding. The search for the universal formula and 'what holds the world together on the inside' repeatedly drives Rausch to explore new and complex paths in his experimental play on the respective image carriers and to create solutions in which coincidence, temporality, process, material and artistic act merge with the subject and title to create a complex unity. The complexity of his works is the result of previous knowledge concerning something new; a kind of cycle that develops Rausch's work in a very dynamic manner. It remains a kind of childish game on the respective image carrier on which everything seems possible: a large, complex EXPERIMENTAL FIELD that can be grasped with almost all the senses.

Jens Rausch was born in 1976 in Fulda in Hesse. He lives and works in Hamburg, where he is a member of the professional association of artists.

His works have been shown in numerous international solo and group exhibitions, for example in Germany, Denmark, Georgia, the Netherlands, Mexico and Japan. He was nominated for the 2015 Wesselinger Art Prize and has taken part as an artist at residential programmes in Iceland, Georgia and Switzerland. 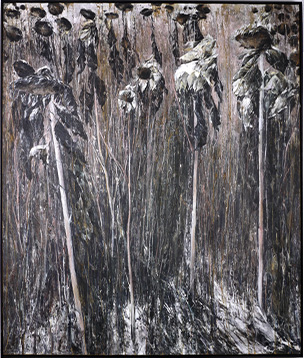