Constanze Vogt’s objects are material transformations. Her artistic process is a reflex of her medium. Paper transformed with a sewing machine into something textile-like. Sentence-like symbols formed out of clothes irons. A carpet woven from filing clips. The textile pattern of a jacket transposed into a person-sized linoleum print.

Through concentrated, lengthy and monotonous working processes, phenomena of transition become visible in a way that the artist herself likens to translation. In this way she makes meter and verse of paper, until it is transformed into a curtain-like object. Visible from both sides, it can become all-surrounding, like some sculptural object that captures the light. As a placed object condensed in the space, it produces a waft of corporality, which itself in-turn undergoes a transition as one examines it. Right to the boundaries of the invisible.

To quote the prize jury’s statement for the Gottfried-Brockmann Prize:

“Constanze Vogt, a young artist from Kiel, makes use of various mediums in her work. Her images, installations, object and written pieces all employ a limited range of materials. She uses ephemeral materials, such as paper, language and light for her works, which examine temporary spaces. The extensive and almost ritualistic working process that she uses to transform the material is clearly visible in her works and extends the objects, endowing them with a performative character. At first glance highly self-referential, the works create a sense of a search for one’s own language to lend a poetical light to the relationship between language, image, object and body.

The particular power and strengths of Vogt’s work lie in exactly this poetical, unspoken language with which she visualises phenomena of transition and transformation. She approaches very precisely the boundaries of visibility and invisibility with a constant and enduring intensity, through which her works are to be interpreted as a conscious and anachronistic commentary on the ever more loudly-expressed popular culture of image making.

Constanze Vogt on her artistic process:

I pull it apart and say to myself, this will become four, convince myself of that and play it as something quartered. Storytelling, sewing and drawing alike, setting everything equal to everything else and once again drawing, sewing, storytelling — what came first has no importance; yet not totally so, since everything has the same importance. I spin myself around and around yet mustn’t, I have to round everything off, round it off in murmurs. 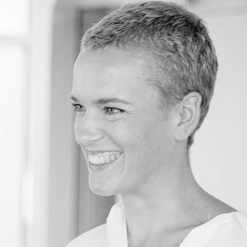