Behind most classical motifs lie conceptually arranged scenarios in which nature and artificiality confront one another. Anna Maria Gawronski constructs her digital, intangible photographs, which just flicker on the screen, using Jacquard weaving in tangible, real woven yarn. The images often posses a medial, second level; by means of fluorescent yarn or 3D-technology, a changing viewpoint is achieved.

The work, Borkener Enten bei Tag und bei Nacht (Borken Ducks by Day and Night), plays with the facets of varied lighting. In her work, Anna Maria Gawronski investigates the waves on a river made by ducks and their reflection of light at different times of the day. Day and night, and the transitions in between, the sunrise and the sunset, are presented on four Jacquard weaves, each in a symbolic colour.

In terms of their choices of motifs, aesthetics and colour choice, the works lean on the Asian art of weaving. The actual location of the event is however the Westphalian city of Borken, where the artist grew up and encountered the local ducks.

The work, FOX 7D, plays with illusion. Real yarn, tangible warp and weft material should serve to assert the reality of an illusionary world in the seven weaves. The weaving process captures this apparent world, rendering it tangible.

Digital pixels of the 3D photographs, just flickering on the screen, have been transferred into very particular threadwork and thus acquire a visible space of overlapping yarns, tangible weight and a tactile, tangible surface relief.

Anna Maria Gawronski has set itself the task of inventing Jacquard weaves which possess spatial depth by means of the putting on of 3D glasses. But the  three-dimensional visible unity in the concept of the work that is ultimately achieved only plays a secondary role, because while the images become spatially perceptible,  the weave is convincing even without the use of a pair of glasses.

So, the red and blue outlines of the somewhat contorted motifs themselves throw up questions as to the reality of the woven photographs and their motifs.

The illusion of the weaves reminiscient of the tapestries from hunting residences lies not only in the alleged three-dimensionality. 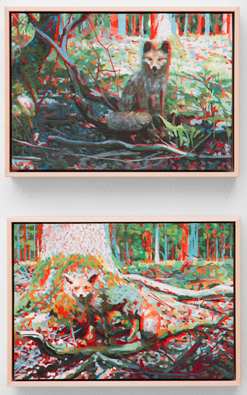 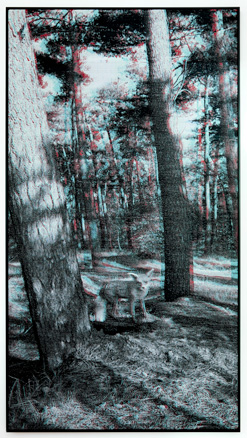